All the fun in the photo booth!

Colten Care held their Christmas party at the Hilton Hotel, Bournemouth & there was a lot of fun in the photo booth throughout the evening!.  We’ve been asked to not display these photos on our web site - but of course everything was published on he night.

We do send all the data files to the organiser after the event.  When it comes to photo albums, especially at weddings, we try to control what gets placed in there.  Our booth butlers may suggest that a particular set of photos be held back until the bride (or groom has seen them).  However - it doesn’t always work!

Colten Care took over one of the function rooms for their party and provided all the decoration themselves.  They organised the Christmas trees and also the stickers that you can see on the side panels of the booth.  What you can’t see from the photo is the Christmas prop boards that we put out. 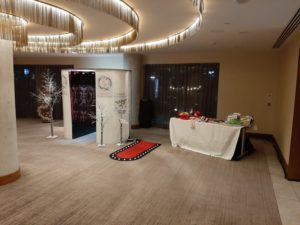 You’ll notice that there are only 3 shots in each photo session - as opposed to the usual four.  This was a deliberate choice and actually helped a lot.  Three shots takes just that little bit less time which helps to speed up the flow.  Whilst it’s nice to have a queue for a photo booth, it can also get a bit difficult to manage.  Three shots meant that we got people through quickly without undue waiting.  This layout (of three shots) would also work well if the event was for children. 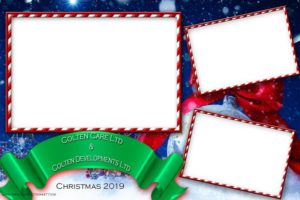 Colten Care are a family-owned care company based in RIngwood.  They have homes across Hampshire, Dorset, Wiltshire and West Sussex.  They also have a sister company - Colten Developments.